The Global Sport for All Movement, under the lead of TAFISA, came together in Tokyo, Japan, as the 26th TAFISA World Congress gathered over 600 participants from 78 countries on 13-17 November, 2019. The Congress featured a historic Joint-Event Day with the Smart Cities & Sport Summit, bringing both organisations' networks and stakeholders together.

The TAFISA World Congress and Joint-Event Day started with words of welcome by the Chairman of the Organising Committee Masatoshi Ito, TAFISA President Prof. Ju-Ho Chang, World Union of Olympic Cities Secretary General Mélanie Duparc, IOC Sport and Active Society Commission Member Felicite Rwemarika, and Nippon Foundation Chairman and WHO Leprosy Elimination Goodwill Ambassador Yohei Sasakawa. Inspiring keynotes were given on the Congress theme "Sport for All Through Tradition and Innovation", by Prof. Stuart Biddle (University of Southern Queensland) and the Commissioner of the Japan Sports Agency, Dr. Daichi Suzuki.

The programme went on with a focus on Active Cities, innovation and building communities, including sessions on Made to Play, Gender Equality in Sport for All, and Adapting Cities to an Aging Society. The contributions of two further keynotes – Keith George, from the Liverpool John Moores University and Caitlin Morris, from Nike Inc., provided insight on the need to build bridges between actors and stakeholders operating at all levels and across all sectors of society to work together and combat the global physical inactivity epidemic.

The Joint-Event Day was then concluded with the launch of a Call for Action on Sport and Active Cities while TAFISA and the World Union of Olympic Cities sealed their future cooperation with the signature of a Memorandum of Understanding.

The TAFISA World Congress went on for the following two days, featuring the famous House of Commons session where this year’s selected speakers (Wendy Gillett, Bluearth Foundation/Australia, Keith Joseph, Panam Sports Organisation/St Vincent and the Grenadines, and Keith George, Liverpool John Moores University/UK) challenged the participants' views and sparked heated debates on topics questioning the relevance of the Sport for All Movement, the necessity for evidence-based practice and the very essence of Sport for All: is sport actually and effectively for all?

The TAFISA Workshop provided a report and update on TAFISA Mission 2030 and urged all actors of the Sport for All Movement to share their ideas, knowledge and expertise to create a better world, while parallel sessions dealt with the Congress' sub-themes: Happy Aging, Made to Play, Design Your Policy and Impact Through Innovation.

In traditional Congress fashion, the TAFISA General Assembly took place on 15 November. TAFISA’s supreme decision-making body approved 43 applicants that became TAFISA members, which reflects on the on-going growth of TAFISA worldwide. In addition, two major decisions were made in connection – the Malaysia Sport for All Association (MASFA) and Kuching City, Sarawak will host the 1st TAFISA Asian Sport for All Games 2022, and the German Olympic Sport Confederation (DOSB) was confirmed as the host of the 28th TAFISA World Congress 2023 in Düsseldorf. The General Assembly also elected the Russian Olympic Committee to host the 8th TAFISA World Sport for All Games 2024 in Nizhny Novgorod, Russia, while the 2nd TAFISA European Sport for All Games 2022 will be organised by the Italian Federation of Traditional Sports and Games (FIGEST) in Umbria, Italy.

On 16 November, participants had a chance to walk the walk and be active as they experienced Japanese "Undo-kai", a fun sporting event where teams play fun games in a friendly and inclusive spirit. The Congress came to an end on the evening with a Closing Ceremony that saw Japan pass on the TAFISA flag to the organiser of the 27th TAFISA World Congress 2021 in Portoroz, Slovenia.

The TAFISA World Congress was also the occasion for TAFISA to meet with numerous partners, and we are proud to announce the signing of a Memorandum of Understanding with the Saudi Sport for All Federation.

TAFISA would like to thank the Organising Committee, its staff and volunteers, without whom the Congress would not have been nearly as successful, as well as the Smart Cities & Sport Summit for their commitment to design a historic Joint-Event Day together with TAFISA, and all Congress participants for their enthusiasm and efforts in creating a better world through Sport for All. 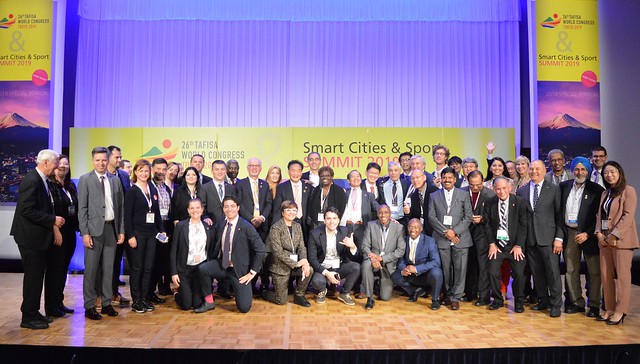 LEADING THE GLOBAL SPORT FOR ALL MOVEMENT

FOR A BETTER WORLD